Warning: Use of undefined constant AW_CSS - assumed 'AW_CSS' (this will throw an Error in a future version of PHP) in /home/customer/www/increasingthepeace.com/public_html/wp-content/plugins/advanced-widgets/advanced-widgets.php on line 16
 Saving Syria: Humanitarian Aid in Action | Increasing the Peace

Since 2012, humanitarian aid in Syria has slowed down drastically. There are 9.3 million people who still need assistance. Needs of the refugees are not being met because of the lack of humanitarian aid.

Many volunteers are losing their lives every day. Some of these volunteers come from abroad, but most of them are local community members. According to the United Nations Office for the Coordination of Human Affairs (UNOCHA), humanitarian aid needs are estimated at $1.41 million US, with food and agriculture at the top of the list. Only 28.3 percent is provided for staff safety services. Essentially, those who are providing services to the refugees are receiving less than half of what they need to do their job.

Many don’t realize the refugees still need help in 2014. The United States provides the most funding, with close to $300 million US going to humanitarian aid. The United Kingdom is second with $134,553,255. From January to June 2013, 12 of 15 abducted United Nations personnel were abducted in Syria.

More than 2.4 million people are displaced, including those in surrounding countries. Humanitarian workers have to deal with an immense amount of problems and situations. They have to provide services to the refugees, trying to work with neighboring country citizens, working in violent areas and not to mention the day-to-day emotional trauma they face. It’s also hard to work with a large amount of Syrian refugees because they are mainly in rented apartments and rooms in neighboring countries, not in camps.

The UN has put in place a “sophisticated security risk management system.” This system states that the host government is responsible for keeping UN personnel, their eligible family members, property and organization’s property safe. Nonetheless, the situation is getting worse. The number of humanitarian aid abductions has gone up.

According to the UN, “significant security incidents affecting United Nations personnel in 2012 showed an increase to 1,793 compared to 1,759 in 2011.” The problem with this is that Syria has a number of terrorist groups who have their own interests in mind. These rebel groups operate outside the government, and do not adhere to government rules.

Catholic Relief Services Director of Syria Response Chandreyee Banerjee calls for everyone to fight for humanitarian aid access for organizations like Catholic Relief Services. These organizations have been cut off, and are denied access to the communities they are trying so desperately to reach. The Syrian Crisis had no end in sight and neither does the need for humanitarian aid. 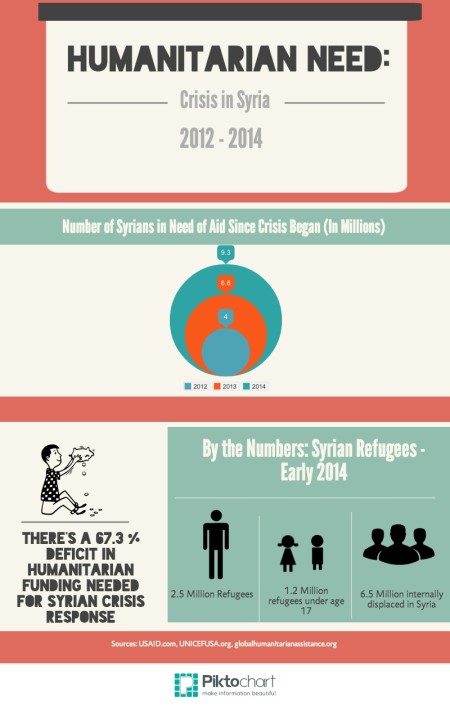