Warning: Use of undefined constant AW_CSS - assumed 'AW_CSS' (this will throw an Error in a future version of PHP) in /home/customer/www/increasingthepeace.com/public_html/wp-content/plugins/advanced-widgets/advanced-widgets.php on line 16
 In Solidarity for a Non-Violent World: SOA Watch | Increasing the Peace

The School of the Americas Watch (SOAW) is a non-violent grassroots movement fighting to close what used to be known as the U.S. Army School of the Americas, on the site of Fort Benning in Columbus, Ga. In January 2001, the name changed to the Western Hemisphere Institute for Security Cooperation (WHINSEC).

Over 64,000 Latin American soldiers have trained at SOA/WHINSEC. These soldiers are trained in counterinsurgency techniques, sniper tactics, commando and psychological warfare, military intelligence and interrogation tactics.

The school started in Panama in 1946, but was dismissed by Panama’s former president, Jorge Illueca. He described the school as the “biggest base for destabilization in Latin America.”

WHINSEC graduates are known to have tortured and terrorized religious leaders, educators, union organizers, student leaders — typically people who fight for the poor. These people have been “disappeared,” or gone missing without a trace, often beforehand being raped or forced from their homes, then massacred, all because of their social justice activism. “School of the Assassins” is the nickname the school has acquired because of all of the bloodshed the graduates account for.

SOA Watch’s spirit was sparked on Nov. 16, 1989, when six Jesuit priests, their housekeeper and her teenage daughter were murdered in El Salvador. A United States Congressional Task Force concluded that the soldiers responsible were trained at the SOA.

The SOA Watch movement was started a year later in 1990 by Fr. Roy Bourgeois, in a small apartment outside Fort Benning’s front gates.

Bourgeois’ movement has transcended borders and nations. It now attracts different organizations that participate in peaceful protests and demonstrations. Every November, there is a vigil at Fort Benning where thousands of people from around the world come together in solidarity calling for SOA/WHINSEC to be permanently closed, and for peace to be promoted further around the world by the U.S. government, their activism each year in commemoration of the anniversary of the 1989 murders. The Vigil encompasses a whole weekend with countless stories and action plans.

During the year, SOA Watch holds many different events to raise awareness about their cause. They also travel to Latin American countries, meeting with governments and showing them why their support for SOA should be revoked.

You are here: Home > Resistance > In Solidarity for a Non-Violent World: SOA Watch 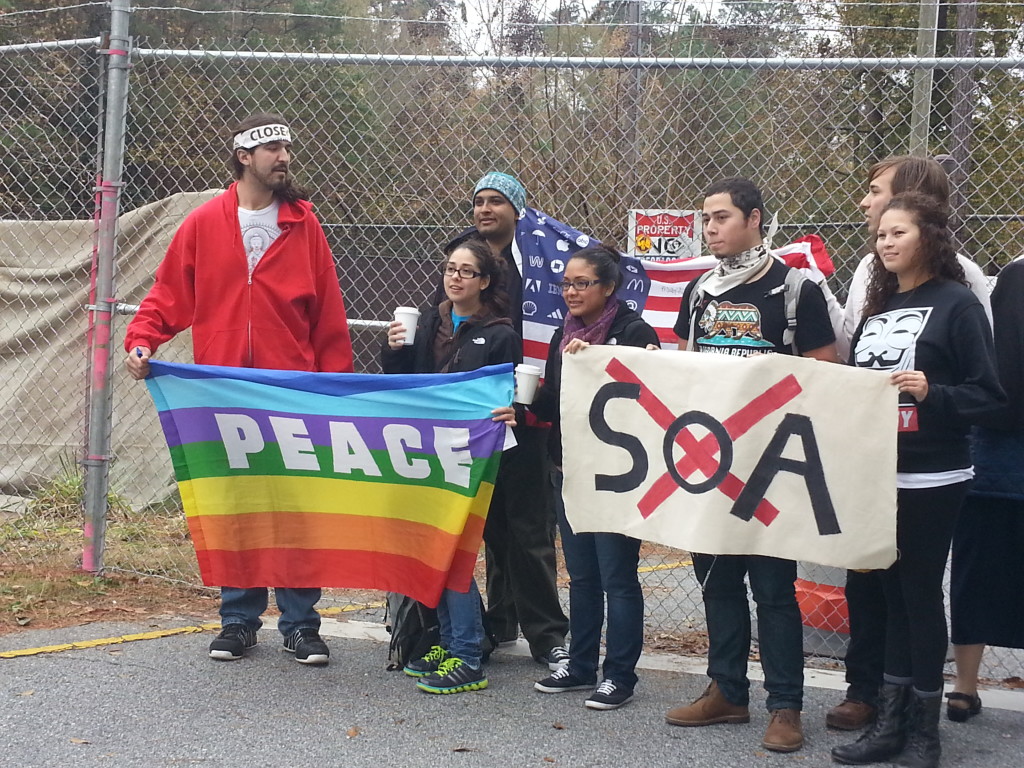 Participants in the 2013 SOA Watch protest hold a sign and flag outside of SOA/WHINSEC. (Jaime Viggiano)