Warning: Use of undefined constant AW_CSS - assumed 'AW_CSS' (this will throw an Error in a future version of PHP) in /home/customer/www/increasingthepeace.com/public_html/wp-content/plugins/advanced-widgets/advanced-widgets.php on line 16
 Corruption: The Dangers of Power | Increasing the Peace

Television, radio, the internet, and all other forms of communication have a profound impact on society. But the tighter the control a government maintains on the media in their country, the less likely it is that the country’s people will know what’s really happening. The core function of the media must be to raise awareness about social injustices, relying on all citizens’ inalienable right to the freedom of speech in order to keep their work important and lawful. Reporters Without Borders’ 2014 World Press Freedom Index shows that there’s a negative correlation between the freedom of information and conflicts; the more conflict there is in a given country, the more difficult it becomes for citizens to access the work of journalists who aren’t controlled by governments – journalists actively working to expose injustice and create the dialogue needed for change.

Just because it’s not happening to you or in your country doesn’t mean it’s not happening somewhere. Without an honest media in every corner of the world, conflicts continue – and peace remains an elusive, almost impossible goal.

You are here: Home > Rights > Corruption: The Dangers of Power 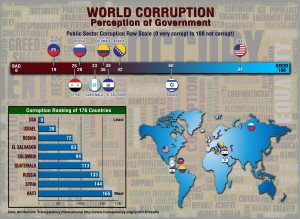 Global corruption of governments, by the perception of their own citizens, remains a real threat to true democracy and freedom of speech. (Infographic Created by Jaime Viggiano)