Warning: Use of undefined constant AW_CSS - assumed 'AW_CSS' (this will throw an Error in a future version of PHP) in /home/customer/www/increasingthepeace.com/public_html/wp-content/plugins/advanced-widgets/advanced-widgets.php on line 16
 Protecting the Displaced | Increasing the Peace

As of February 2014, $81.02 million is needed for education to go towards Syrian school-aged children inside of Syria. Only $75,909 is provided, leaving a 99 percent gap in education funding. Syria is known for their highly-educated youth and love for their land. The position the uprising has put them in is an uncomfortable one in which was totally unexpected.

In places like Bosnia, communities are split because of the religion and race war in the early-to-mid 1990s. Serbs were attacking the capital of Sarajevo, widening the gap between the youth on both ends. As of 2013, there are 27,419 refugees from Bosnia and Herzegovina and to this day youth in Bosnia are still divided.

Refugees are escaping harsh conditions, and some are even denied refugee status. According to the UN a refugee is “someone who has been forced to flee his or her country because of persecution, war, or violence.

A refugee has a “well-founded fear of persecution for reasons of race, religion, nationality, political opinion or membership in a particular social group.”

These people are from everywhere with different backgrounds. Some come from mostly stable countries like Syria — which features some of the most prestigious universities in its region. 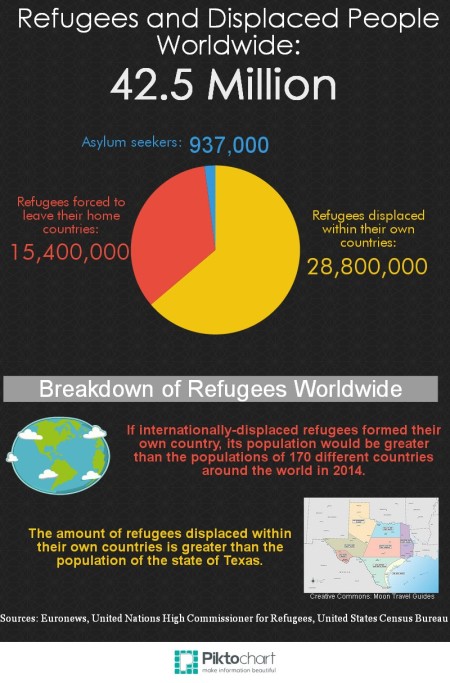 Everyone has a right to their nationality. We all belong to a state — no matter where we come from, we have a right to belong. What we are also entitled to, as humans, is safety and security.

As of mid-2013, there are 38,523 refugees from Haiti, and none have returned. In situations like Haiti’s, even if refugees want to return, they most likely couldn’t. So the only other option is to obtain permanent residence in a new country.

Many refugees are faced with this conflict when they come to a new place. Some choose to take up citizenship in their new countries and others want to go back to their home countries.

The European Union has seen a significant spike in every country when it comes to Syrians applying for asylum. As of January 2014, the United Kingdom had accepted over 1,500 Syrian asylum seekers into their country.

During emergencies, the World Health Organization defines displaced people as anyone who has “had to leave their homes as a result of a natural, technological or deliberate event.”

Anyone and everyone is vulnerable to becoming a refugee and/or displaced person. No matter how well off the country or state is, anything can happen at the drop of a dime to turn everything upside down.

You are here: Home > Rights > Protecting the Displaced