Warning: Use of undefined constant AW_CSS - assumed 'AW_CSS' (this will throw an Error in a future version of PHP) in /home/customer/www/increasingthepeace.com/public_html/wp-content/plugins/advanced-widgets/advanced-widgets.php on line 16
 Water Security in Israel/Palestine | Increasing the Peace

As of 2011, 2.6 percent of the Palestinian population of the West Bank is not connected to a running water source – roughly 100,000 people. This number has decreased since 2008. The water crisis is even worse in the Gaza Strip, where 95 percent of the water is unfit for drinking due to saline and pollution. Water from Gaza’s aquifer is estimated by the United Nations to become fully unfit for human consumption by 2016.

Both the Gaza Strip’s and the West Bank’s water supplies are similar, however, in that both suffer from faulty water infrastructure resulting in a loss of 44 percent and 36 percent of their water supplies respectively due to outdated and damaged pipes.

“That means you have to buy water in tankers,” Yaniv Mazor, an Israeli activist for Ta’Ayush, said. “Now some of these communities are very very far away from the road. The farther away you are from the road, the higher the price of the water. Some families over there spend as much as a third to half their income on water, which is ridiculous, because in Israel we pay pennies for water.”

The Israeli government controls access to water, which includes the water supplied to the over 2.5 million Palestinians living in the West Bank. According to B’Tselem, an independent human rights organization working to improve Israeli policies that affect the Occupied Palestinian Territories of the Gaza Strip and the West Bank, Israelis receive 86 percent of the water supplied to the region, while Palestinians receive the remaining 14 percent. That means 2.5 million Palestinians receive one-third less per person than the amount of water recommended by the World Health Organization for one day.

While Palestinians each day must effectively ration their water, Israelis can keep their faucets running.

You are here: Home > Rights > Water Security in Israel/Palestine 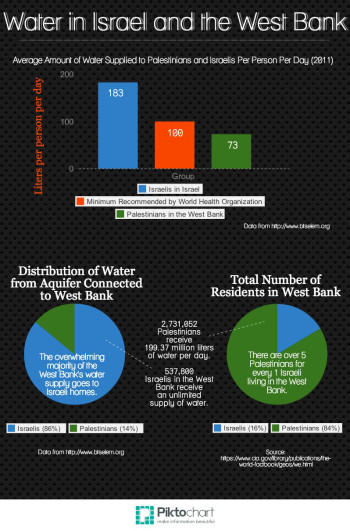 Water distribution between Israelis and Palestinians is drastically different. (Infographic by Brandon Desiderio)